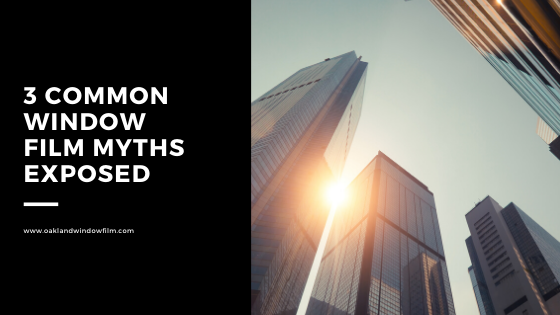 At Oakland Window Film, we’ve been installing window tint for people’s homes, offices, schools, and buildings for about twelve years. During this time, we’ve heard just about every concern in a book. These, of course, we’re happy to address and discuss with our customers. We want them to feel secure about their decision. Window film, after all, is an investment.

But sometimes it is surprising to hear the strange myths and concerns that we do. The truth is, there’s a lot of misconceptions about window tint on the internet. Some are spread by window manufacturers with ill-intentions, others are the result of general hearsay or folklore.

Either way, we feel that it’s our duty as industry experts to shed some light on these matters. In this post, we’ll be discussing the most common window film myths and concerns brought up by our Oakland customers.

While there are a lot of false statements about window film online, there are a few that we hear more often than others. Here are the three most common window film myths that our Oakland team comes across.

Myth #1: Window film is a waste of money.

Well, that depends on who you’re asking. If you’re asking a window company that makes expensive triple pane windows, of course they’re going to tell you this. They want your money. But, in reality, most architects and energy saving experts agree that window film is highly effective. It’s even recommended by the Department of Energy.

Myth #2: It makes your windows cloudy.

Not true. During the drying period, the film may appear slightly cloudy until it’s cured. But that only lasts a couple weeks. If your windows get cloudy anytime afterward, it’s probably the result of a bad window seal.

Myth #3: It’s bad for the environment.

Actually, installing window film is a great way to reduce your carbon footprint. Studies show that window film can diminish a building’s energy use by up to 30%.

Window film myths will always exist in Oakland. But now you know the truth. And when in doubt, you can always call us and ask. We’ll be more than happy to discuss your concerns. Call our office today to request installation services and experience the benefits of window tinting for yourself!